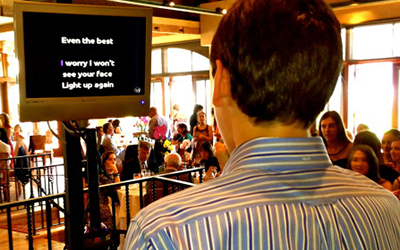 Learning to enjoy singing led to the problem of memorizing the words.  Videodisc and CD+G made synchronizing lyrics possible.  Synchronizing the sound with the visual was the early part of my entrepreneuial career.  When I learned that “Dragon Lair” game was run from a computer driving the playback of the video, I knew that interactive media was going to be my career. Computers where not fast enough to render the visual so the “play” would seek to the position of the video disc for the “pre-recording” video segment that went with play.  You might have latency of 1 to 4 seconds but this was the best interactrive video available.

Videodisc was a great fit for Karaoke.  You could pause, skip ahead or back, select a new song etc.  I learned what I could then got a job as a video producer with an agency that had all the equipment I needed for video production. I started to get contracts for “interactive video”.  These were to create material for training, kiosks, simulation, and of course karaoke.   Even computer training was made from capturing video from computer screen, then in the post production creating the interactivity and narration.  Eventually,  I incorporated under the name of Interactive Creations, Inc.

The closest thing in the late 80’s to get visual material on a CD was using the format CD plus Graphics (CD+G) which remained the best way for putting Karaoke on disc unti DVD became a standard format. We got work from Warner Interactive, The Singing Machine, Priddis Music, Commodore, Tandy, 3D0,  and even Philips.  We created an improved CD+G encorder and decorder.  The production companies wanted the encoder and the manufacturers of the multimedia entertainment machines wanted the decoders. Which is interesting since in the world of Dyslexia the phrase decoding sounds,  decoding words, decoding meaning, and decoding dyslexia.   Decoding the writing or spoken language into my brain for meaning and memorization is a different processing than 80 person of the general public.  An I might say that encoding what’s in my brain to speak or write is a different process than the majority of people too. They have learned that highlighting words while listening to the reader helps in the sequencing and comprehension.

Anyway, even though I had no idea about my Dyslexia, I was doing work that improved by coordination ability and provide entertainment and exersize for others.  All of the syncrhonized editing of lyrics or narraction with graphics, animation, and video was great left-brain/right-brain exercise for me.  I was doing something that felt right for me and engaging for others.  I didn’t know that its was therapeutic.
Read about Joyful Music & Dance Studios. <a href=”http://www.joyfulmusicanddance.com/blog/posts/music-therapy-helps-children-with-autism-and-developmental-dyslexia-use-and-understand-speech.html”>Music Therapy Helps Children</a>  with autism and develpmental dyslexia use and understand speech.